Last night, I was going to watch a little bit of the Orioles game and go to bed early, since I have been getting up at 5AM most of this week for work.  I ended up watching the whole game, in part because Chris Davis accomplished something that no Oriole had done since 2006 - he belted 3 home runs in the same game. 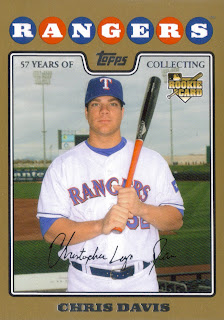 Davis has really done a great job this year, after finally getting regular playing time in the bigs.  I'm still surprised that the Orioles were able to take him from the Rangers along with Tommy Hunter in exchange for Koji Uehara last year.  It just shows you how deep the Rangers are in talent that they could pretty much give Davis away.  It also speaks to how good, albeit underrated, Andy MacPhail was as Orioles GM.  Love him or hate him, MacPhail did a terrific job making trades given what he had to work with and deserves a great deal of credit for this year's surprising run by the O's. 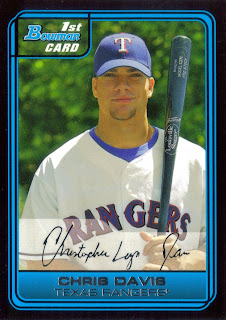 I picked up the two above cards from the National Card Show, both from dime boxes.  The first was a 2008 Topps Gold RC and the second is a 2006 Bowman RC.  I was really happy to add these to my collection for a dime a piece.

Davis has already exceeded his career high in home runs and is sitting at 23 with well over a month of the season left.  He also has 103 hits and a .256 batting average, so far.  Also, he has one fewer win as a pitcher this season than Cliff Lee, just saying.  I would be elated if Davis eclipsed the 30 homer mark for the season.  Last night, Orioles broadcaster Rick Dempsey remarked how Davis reminded him of a young Mike Schmidt.  Man, if Davis turned out to be the type of home run hitter Schmidt was, that would be great for the O's.

Davis has already become one of my favorite current Orioles and I hope he can continue to add to his numbers as the Orioles make a push for the playoffs.  I hope to meet him at next year's Fan Fest and get his signature on a ball, maybe with an inscription of his pitching record.
Posted by William Regenthal at 6:19 PM