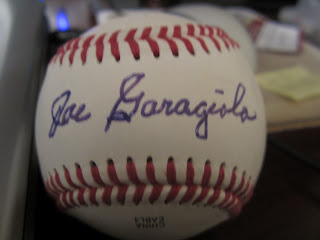 Mr. Garagiola signed my ball for a fee of $25.00 toward his charity.  I mailed the ball to him on July 25, 2012 without the donation and got a note back from him explaining why he was asking for a $25 donation, and I was happy to oblige. 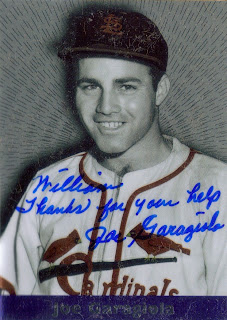 I also got this signed chrome card from him, which was really nice.  He has really good handwriting, and the blue marker really pops off of the card.

Garagiola worked for NBC for nearly 30 years, calling games with legends such as Curt Gowdy and Vin Scully.  As a result of his years broadcasting, he was a recipient of the Ford Frick Award in 1991, thus becoming a member of the Hall of Fame.

Garagiola is my 75th Hall of Famer and 3rd Ford Frick Award Winner (the others being Ernie Harwell and Bob Uecker).
Posted by William Regenthal at 6:39 PM

Congratulations on the 75 milestone, William! You're an inspriation. I've changed up my direction a bit with my last few balls. Opting to chase down non-HOF Yankees that I really wanted for other particular reasons but I feel a stron 'Call to the Hall' coming for the next batch of ROMLBs!

Thanks for sharing these GREAT pieces!