One of the unexpected highlights of the National Card Show was meeting former AAGPBL (All American Girls Professional Baseball League for those of you who HAVEN'T Seen A League of Their Own) player Dolly Niemiec Konwinski.  She was in the AAGPBL booth with two other ladies who had played in their minor leagues.  I stood at their booth and listened as she greeted fans and signed autographs.  Finally, I asked her what she charged for a signed ball and she said 5 bucks.  I had to do it, so I got one of the balls I had in my backpack that was leftover from the Montgomery Biscuits game and had her sign it. 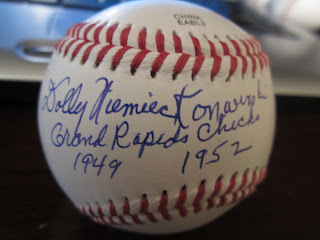 She also offered to pose for a picture, which I happily accepted.  She was just a gem of a lady, very sweet and friendly.  My wife went to their booth later and paid for a signed photo of Mrs. Konwinski.  We both left that booth really happy that we were able to meet and speak to someone who contributed to the history of the game. 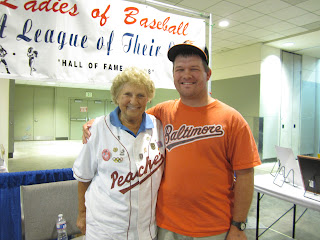 Mrs. Konwinski (b. 1931) played in the AAGPBL (minor and major leagues) from 1948 to 1952 before her career was cut short due to an auto accident.  After her career ended, she went on to become a professional bowler and also coached her sons' little league teams.

Posted by William Regenthal at 6:44 PM

That's cool ! I met her in Cleveland a few years ago. I love anything about the history of the game.