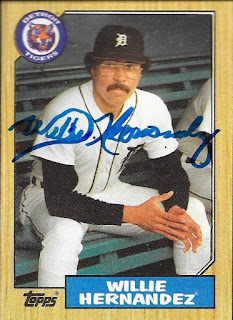 This was a nice private signing that landed me a pitcher I needed for my 1987 set.  Unfortunately, he is on two cards in the set, and the second card was one I wasn't ready to send (the Tigers leaders card).  Still, I crossed this one off of my list, and it turned out well.

Hernandez appeared on the 1995 Hall of Fame ballot, but received only 0.5% of the vote.