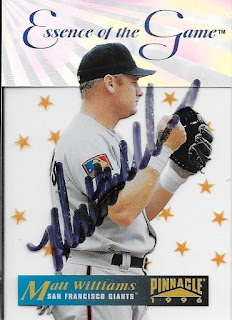 This was a TTM request that I had high hopes for, and I ended up with a nice success.  The autographs from Matt Williams didn't turn out like I had hoped, but the cards are still signed, and they have moved from being buried in my TTM box to my autograph album.  I can't complain a whole lot about that.  This 1996 Pinnacle Essence of the Game is an acetate card, and it looks a lot better in person.  I had prepped the card, but I think Williams used an old Sharpie on it. 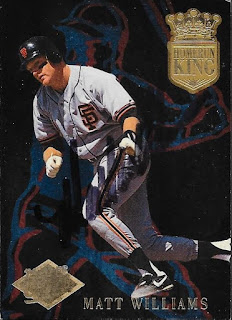 This 1994 Fleer Ultra Homerun King card also looks a lot better in person.  I had this card floating around several piles of cards in my office/card room.  It seemed to be jumping out at me every time that I looked through cards, so I finally put it aside in my TTM box and ended up including it with my TTM request.  I am actually really happy to see this one make its way into my autograph album.

I mailed to Williams on February 15 via A's Spring Training and got the cards back on February 25, for a 10-day TAT.

On a personal note, Williams was a huge name in our house back in the 90s.  My older brother, Philip, was a huge Giants fan.  He loved Will Clark and Matt Williams.  Maybe Philip will send some cards off on his own and get back a few autos.  Maybe?
Posted by William Regenthal at 9:32 PM

Nice success. I got to spend a bit of time with Matt Williams a few years ago during a Spring Training trip. He was a prince.