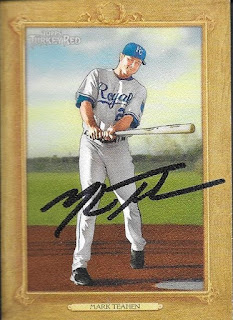 I was really glad to get a bunch of these late 2000s cards signed TTM from Mark Teahen.  I have a ton of this kind of stuff, and would love to get more of it signed, but players from that time-frame don't sign a lot of TTM.  This 2007 Turkey Red is definitely one of the types of cards that I really wanted in my autograph album.  It turned out really well with Teahen's signature.

I also added a 2005 Upper Deck, 2008 Piece of History and a 2007 Finest.  They al turned out well, I think.  Piece of History was an interesting set that I opened quite a bit of when I was at the old card shop.