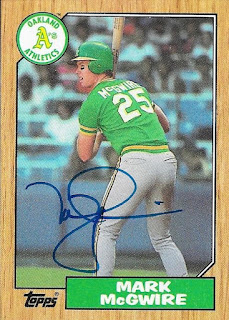 I only had one in my entire collection, as far as I can remember (and from what I was able to find), so I held this 1987 Topps Mark McGwire pretty closely for a while.  It made its way into my IP autograph book last summer, just in case Chris and I would see him when we saw the Padres face the Rangers.  We weren't able to see Big Mac when we were in Texas, and once the season concluded, I learned that McGwire was stepping down as the Padres hitting coach to concentrate on being home with his kids.  I wasn't sure when I would get a chance to get him on my 1987 Topps card, so when I saw that he was signing through a private signing on SCN, I went ahead and paid the (really high) fee to go ahead and ensure that I would get this card off of my list and into my album.

The card turned out really well, much better than anything I had seen through mane of the IP autos that some of my Spring Training buddies were able to get, so maybe it was worth the fee.

In 1998, McGwire, along with Sammy Sosa, captivated baseball fans everywhere when the two sluggers were threatening to break Roger Maris's single season home tun record.  It was McGwire who would eclipse Maris's mark on September 8, 1998, with a line drive home run that would be number 62 out of an eventual 70.  Baseball had recently emerged from a crippling strike that drove countless fans away.  Many of which would return to watch Sosa and McGwire chase the legendary home run record.

Unfortunately, no one can look at that spectacle from the summer of 1998 and only think of the home run record being broken.  Steroids will always and forever be linked to that home run chase, and rightfully so.  It took nearly 12 years, but in 2010, McGwire came clean and admitted that he did, in fact, use steroids during the 1998 season.  He seemingly has been forgiven, but his place in baseball immortality definitely took a hit.  He had appeared on 10 Hall of Fame ballots between 2007 and 2016, but never received more than 23.7% of the vote before falling off of the ballot after 2016.  His only chance to make the Hall now lies with the Veterans Committee, comprised of his peers and contemporaries, many of whom have taken a hard line against admitted steroid users being admitted into the Hall.  He faces an uphill battle due to the steroids alone.  Add in the fact that if one takes out the home run facet of his game, he was quite the one-dimensional player.  He struck out nearly as many times as he hit safely (1,596 to 1,626) and performed poorly overall in the playoffs (5 homers and a .217 batting average across 42 career playoff games).  Not that my opinion matters on the subject, but, many folks have asked me in the past what I thought of McGwire's Hall of Fame candidacy IF steroids were factored out.  Well, he was truly one of the biggest stars of the game in the late 80s all the way to the early 2000s.  Based on his stature alone, yes, he would have had to have been a Hall of Famer.  Sometimes it isn't all black and white when the numbers are concerned, but the steroid problem IS there, and cannot be bypassed.  For that reason, I don't see Big Mac ever being inducted into the Hall at any time.