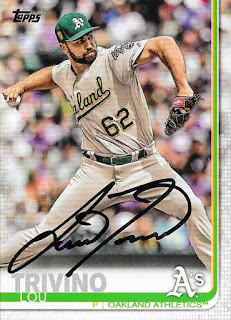 Another Spring Training success came recently, this time from A's pitcher, Lou Trivino.  The card turned out really well, and Trivino has a nice signature.

I mailed to Trivino on February 7 and got the card back on February 19, for a 12-day TAT.
Posted by William Regenthal at 7:20 AM