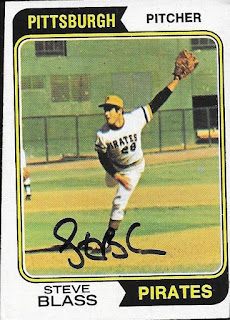 I started with one card, then bumped it up to four after a visit to Sportlots and ended up with a nice TTM success from Steve Blass.  I wanted a few more older cards to go along with the one 1973 Topps that I had, and picked this 1974 up (too bad it is miscut).