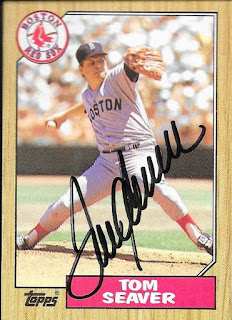 This was going to be a tough card to get, far before Tom Seaver announced that he would be retiring from public life due to a recent diagnosis of dementia.  He had already largely given up signing, and I knew my best hope of adding him to my collection was going to be through the secondary market.

Luckily, I have two other guys I know that either are putting the set together, or have already completed it.  They both have been helping me look for some of the tougher guys, and when one of them messaged me the other day to tell me that a Seaver popped up on Ebay, I jumped at the chance to go ahead and cross that name off of my list.

The cost was pretty high, but in the end, I would have regretted letting it pass, so I made sure the card would be in my album.

Yeah, I was lucky that I took the plunge on a Seaver auto before the news came out. It's a pack-pulled auto, but it was cheap because the auto is really faded. Still--it's a Tom Seaver auto! My first favorite baseball player, at least as far as I can remember.