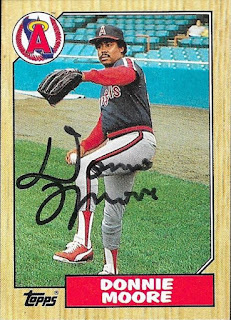 When I took on this 1987 set, I knew there were going to be some really tough guys to get.  Donnie Moore is one who I really thought I would have a hard time, because he died in 1989, only two years after the set came out.

During the 1986 ALCS, Moore would give up a key home run in Game 5 that would put Boston ahead of the Angels.  The Angels would tie the game and go to extras, with Moore still on the mound.  He would end up giving up the game winning run on a sacrifice fly in the 11th inning.

Moore was released by the Angels following the 1988 season and signed with the Royals.  He only pitched in the Royals minor league system in 1989 before he was released.  On July 18, 1989, Moore would get into an argument with his wife.  While their three children were in the house, Moore shot his wife three times with a .45 pistol.  She and their 17-year old daughter would escape the house, with the daughter transporting her mother to the hospital.  Moore's wife would survive the shooting.  Meanwhile, in the presence of at least one of his sons, Moore would commit suicide by shooting himself in the head.

This is a terrible and tragic end to a ballplayer.  Thankfully, his wife survived.
Posted by William Regenthal at 8:39 PM

So sad. Glad his wife lived.

So how was this auto picked up? Was it certified somehow or does it match existing autograph samples?