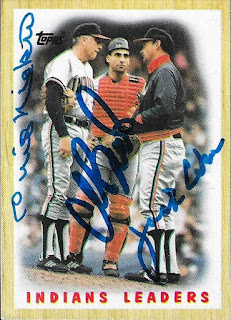 I finished this Indians Leaders card for my 1987 Topps set by sending off to Chris Bando via PastPros.  I had a couple of the unsigned cards out to a friend of mine in Arizona for signature, bur I held back the one I had already gotten signed by Jack Aker.  I sent it off to Phil Niekro and got it back pretty fast (sent on January 28 and got the card back on February 2, for a 5-day TAT) and included a $20.00 fee. 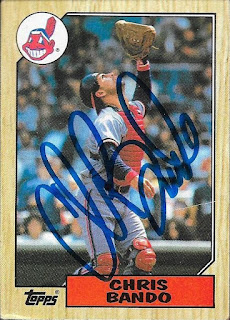 I also knocked out Bando's base card, so this was a really successful TTM submission.

I mailed to Bando on February 11 and got the cards back on February 22, for an 11-day TAT.
Posted by William Regenthal at 9:27 PM