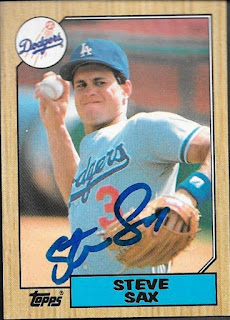 I was informed recently of a private signing that wasn't listed on SCN.  A friend of the blog (thanks, Rich), told me that he had heard Steve Sax was signing as a promotion for an orthodontist's office in California.  Rich wasn't sure if they accepted mail-ins, so I emailed the person promoting the event, and yes, they did take mail-in requests. 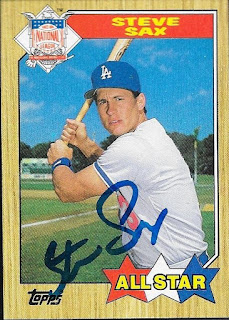 So, I sent the two 1987 Topps cards that Sax had in the set, and sent them off for $25/each.  I had to get a money order for the signing, which is something I haven't had to purchase in years.

I mailed to the private signing on January 19, and got the cards back on February 7, for a 19-day TAT.
Posted by William Regenthal at 5:47 PM