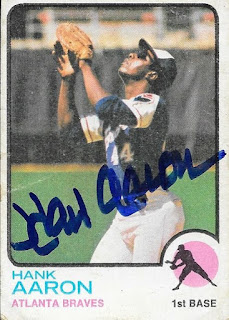 Sometimes, you take a shot in the dark.  You never know, maybe it'll pay off.  I had those thoughts last year, when on a whim, I sent two cards TTM to the living legend, Hank Aaron.  I sent the cards with low expectations.  Those expectations are actually evident in the cards that I sent.  I had the above rough 1973 Topps card, and the below 2001 Topps Golden Moments.  I figured, if they were lost forever, no big deal, at least I tried.  I would be out two lesser of his cards and two stamps.  I had a 1974 Topps that I probably would have rather gotten back, but I didn't want to lose that card.  This 1973 Topps was a bit rougher, so I was cool with seeing if taking a chance would pay off.  It ended up doing just that! 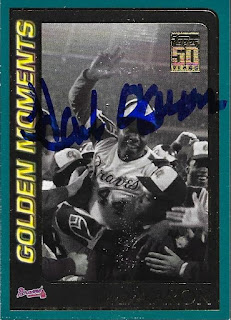 How my TTM process usually works is, I get the envelopes in and try to organize them by age depending on the type of stamp I used.  I try to buy different stamps any chance I can get, so I can keep a relative age of what comes back.  Then, I sort the envelopes from supposed newest to oldest and let my son, Chris, read off the postmarks and hand me the envelopes to open.  He enjoys "helping" out. I, then open the envelopes one by one, cut the stamps off and put those in a little baggie.  Because, why not?  I, then, post the successes on Instagram and the autos make their way to this blog in the order in which they are received.  I bypassed that last step today, because of how epic this success was.  Hammerin Hank jumped all the way to the front of the line!

When I was opening the envelopes, Chris read off "Atlanta Metro" and I looked at the stamp.  I said "This is a flag stamp from last year. So, this one has been out a while."  I cut the envelope open and say the edge of the back of a 73 Topps.  I told Chris "Well, I bet it isn't Hank Aaron..."  The cards slid out of the envelope and I saw that it was Hank... and they were SIGNED!  I yelled out "Holy S*it" like 4 or 5 times, enough that my wife yelled across the house "What's wrong?" and Chris was just as stunned as I was...  I'm still shaking; my instagram, texts and snapchat are all still blowing up, an hour later!

I have gotten some cool TTM successes over the last 9 years, but this one has to be the biggest.  There are many that I hold dear and have great stories, but this one was amazing.  Also, I paid no fee!

I wrote all of the stuff above, then went and ate dinner.  It didn't take very long at all for someone to comment on my Instagram post that the autos were fake.  I don't think they are.  Yeah, his auto on a ball has gotten pretty shaky, but you can lay a card down on a table and sign it, when it is much harder to sign a ball.  So, that theory goes out the window.

It was one person on Instagram, really.  For some reason, some people enjoy raining on other people's parades on social media, which I have never understood.  I sent the kid a photo of my 73 Topps beside a PSA authenticated signed 54 Topps, and they match.  Of course, he didn't respond.  That's ok, I don't need his validation.

That being said... I'm so excited these came back!  I have profiled Aaron before when I got him on a baseball from Conrad, but I will do it again, because, well, it's Hank Aaron.

That is truly awesome!!!

Amazing! Congrats on the cards.


And, yes it's really sad how some folks can't stand other people's success and have to throw negatives their way. The internet has turned some folks into jerks.

excellent. that 73 topps is a great card.