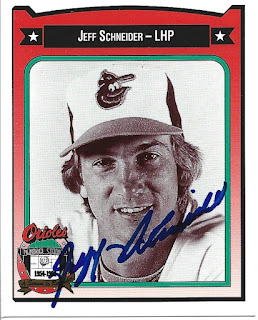 One of the cards I sent to former Oriole, Jeff Schneider, is missing from this post because right after I got this TTM success back from him, I sent the card to the second of three people featured on it.  Once the third guy signs the card, it will be a nice feat, as it is the 1982 Topps Orioles rookies card.  The card has Schneider, Bob Bonner and Cal Ripken, Jr.  I did get the card back signed from Bonner, so now, all I need to do is wait for another signing with Cal.

In the meantime, I also had gotten this 1991 Crown Orioles card signed by Schneider.  It turned out nicely.

I mailed to Schneider on October 25 and got the cards back on November 7, for a 13-day TAT.