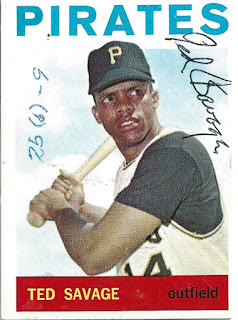 This is another card that I pulled from my vintage Topps box and sent out for TTM.  This 1964 Topps Ted Savage card wouldn't have made it into a completed set, since it already had writing on it, so the next logical step was to get more writing on it in the form of Savage's signature.  I don't know what the writing is for; the card came that way from some old collection I picked up a while back.

I mailed to Savage on October 17 and got the card back on November 7, for a 21-day TAT.  He also signed my note and my envelope.

Posted by William Regenthal at 6:07 PM