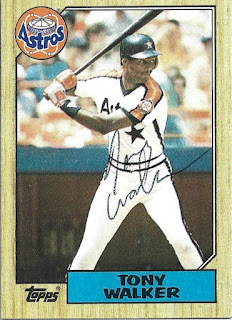 These two signed 1987 Topps cards are two of the tougher ones to add to the set.  I got up with someone on Facebook (Marty S.) who was dismantling his signed set.  So, I bought these two off of him, and had him put aside a few more for a later purchase.
I had written to Tony Walker several times, but had gotten RTS on everything I sent.  When I saw this one available, I went ahead and took the deal, so I could cross him off of my list.
Walker (b. 1959) played in the majors in 1986 for the Astros.  He had 20 hits, 2 home runs and a .222 batting average. 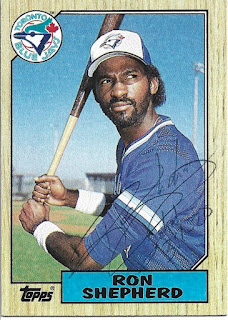 I had sent to Shepherd a while back, but never got anything in return.  This signature is really faint, so if a signing comes up, I'll probably try to upgrade this one at some point.

I'm looking to scrape together some more money to buy a few more cards off of Marty, so I can keep pushing this set toward completion.  I know that Ricky Wright (and Dick Howser and Roy Lee Jackson) will keep this out of reach, but I'm going to keep trying.

Posted by William Regenthal at 6:05 PM

Still loving the progress you're making on the set, keep going!