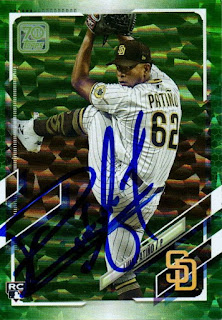 Most of the 2022 50/50s have come back in, but a couple are still lingering out there.  One of the recent ones that came back was a small one I sent out to a kid named Preston in Charlotte.  He graphs the Knights and also goes to Winston-Salem and Kannapolis.  I finally met him in person this year at a Dash game (that rained out).  Preston took a couple cards for me and got them signed at Knights Stadium.  The above 2021 Topps green shimmer card of Luis Patino was the key to the deal, and Preston didn't disappoint.  The card turned out great (and I even forgot I sent it out). 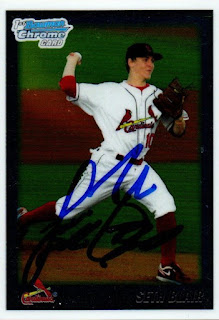 Preston also got this 2010 Bowman Chrome signed for me by Seth Blair.  These were the only two cards Preston was able to get done, but he told me that he would try to get some done for me next season.  He's a good kid, and I'm not worried about quantity.  He was also worried about how long it took for him to get the package back, and I wasn't worried about that, either.  I think he felt bad, but I understand, we all get busy.

Anyway, Preston is a good guy, and I hope we can do some more 50/50s in the future.  It seems like he may be growing out of getting cards signed at the moment, but I bet he will jump back in the game, once he realizes how much he misses it.  We'll see.

Posted by William Regenthal at 8:03 PM