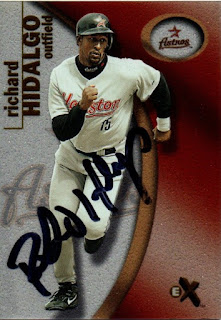 When I saw that Richard Hidalgo was signing, I was really excited. This was because I had a ton of his cards in one of the boxes I got when the card shop closed. I sent off four of the cards to him for signature and they certainly back looking great.  Obviously I had to send the above 2001 Fleer Ex.  I really love this set, and have gotten a few of them signed by now. They always look awesome in my album, and I definitely wouldn't mind adding more. 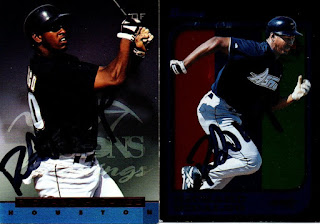 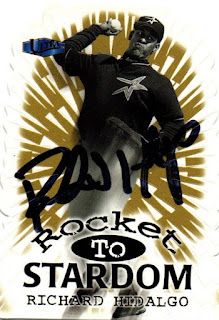 This 1998 Fleer Ultra Rocket to Stardom looks great, as well. This is a die cut card, but that is hard to tell from the scan.

I mailed to Hidalgo on October 8 and got the cards back on October 28, for a 20-day TAT.

Posted by William Regenthal at 7:39 PM