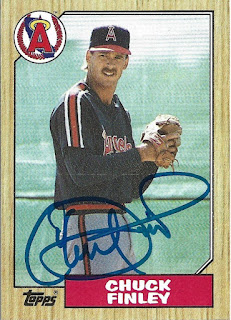 A super tough 1987 Topps was finally taken off of the checklist when I got this TTM success back from a private signing with Chuck Finley.  I had been waiting for a while for a signing to come up, and I finally got into one.

Fun fact, at one point, Finley was married to Tawny Kitaen (the model from the Whitesnake video).

Posted by William Regenthal at 5:32 PM

That's an odd price to pay for his signature. Solid player though, congrats!