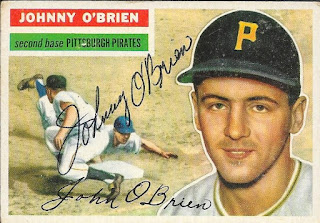 I received a TTM success today from former player, Johnny O'Brien.  His cards were some of the last that I have been waiting on that I bought at the Columbia antique shop back in April.  I'm happy that I have gotten the cards back, because I was beginning to worry.

The above 1956 Topps turned out really nice, I think.  I like the play at second base depicted on the card in the background.  1956 Topps is a really nice set, and I believe more and more that I am going to go for this set sometime soon.  Of course, I need to get the Mantle. 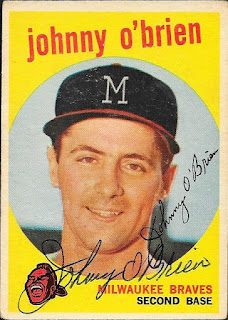 This 1959 Topps also turned out nicely.  I'm glad I was able to get this one signed, as well.