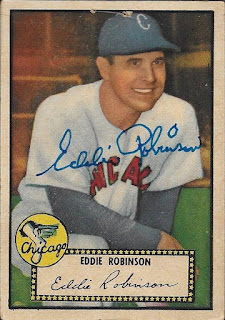 I got a back a TTM success today that I had begun to think I wouldn't see again.  I sent this 1952 Topps to Eddie Robinson on March 19 and got it back signed today, for a 131-day TAT.  Robinson charges a $10 fee for his autograph, so I had to include that as well.

I had gotten him once before, on a ball, but I wanted to get this 1952 Topps signed.  The card looks great and his signature does as well.