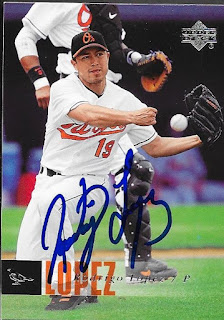 My good friend Max sent me yet another care package recently, this time with a bunch of base cards to take with me to The National, for the VIP signers.  I'm going to try to get a few things signed for him, but it is going to be tough, since the handlers pretty much don't let you get more than one item signed at a time.  I intend to use some of my Wild Cards to help Max's collection out.

Max did include some cards for my collection in his package, as well.  He sent me a Mychal Givens auto that he pulled out of 2016 Topps and the above IP auto he got from former Oriole, Rodrigo Lopez.

I always liked Lopez when he was with the O's.  I was sad to see him get traded to the Rockies for Jason Burch and Jim Miller in January 2007, but his time had pretty much come.  I love that Max thought of me to get this card signed.  Thanks a lot, buddy!
Posted by William Regenthal at 9:38 PM