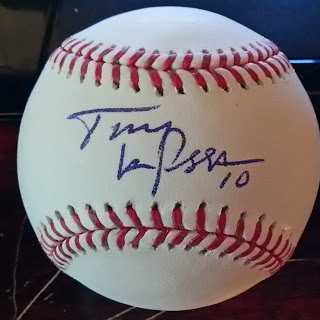 I haven't added to my Hall of Fame signed baseball collection in a long time, so I decided when I got my case of OMLBs in for the National, I would go ahead and try Tony LaRussa TTM to go ahead and get one out of the way.

I mailed to LaRussa on June 27 and got this ball back on Friday (July 8) while I was in Baltimore.  Still counts as an 11-day TAT.

LaRussa was elected to the Hall of Fame in 2014 by the Veterans Committee, in his first time on the ballot.  He is my 122nd Hall of Famer on a baseball.
Posted by William Regenthal at 6:05 PM