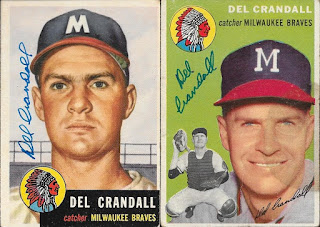 I had a TTM return waiting on me when I got home from Baltimore, yesterday.  The envelope had come on Saturday, but I was sitting in the heat, watching the Orioles beat the Angels.  Inside the envelope was a success from former player, Del Crandall.  Crandall charges $5/card, but since I bought all of these cards at the Columbia antique shop in April, I went ahead and sent $20 to get them all signed.

Above are the 1953 and 1954 Topps that I got signed.  They both turned out great.  I feel like I really enjoy getting the 53s signed for some reason.  I wish I had the money to build that set, but that one will cost an arm and about 8 legs.  1954 Topps is a great set, too, and it is one that is far more realistic to pursue. 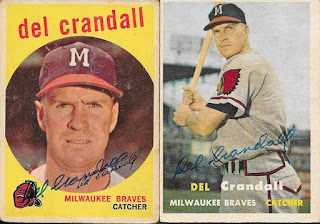 I mailed to Crandall on June 27 and got the cards back on Saturday (July 9) for a 12-day TAT.
Posted by William Regenthal at 5:49 PM