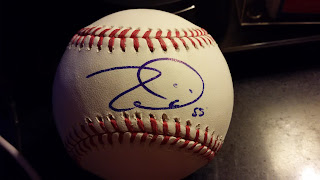 I had one of my best IP autograph success today, almost by accident.  I am in Baltimore with my sister and have tickets to the Orioles series against the Angels.  My goal was to try to get Mike Trout on a ball.  I was actually really close to getting him, but I wasn't quite lucky enough, but I did get someone pretty awesome, Tim Lincecum.  You can see the ball that I got signed, it turned out great. 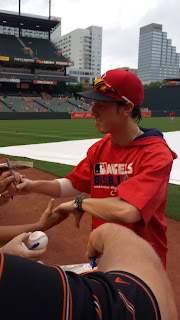 When Lincecum came up to where I was at, a small kid in front of me who had already had his ball signed offered to get mine signed as well, since he was right up against the wall.  This helped my ball get to the front, and Tim signed it.  While he was signing, I told him "You are my son's favorite player, ever.  He loves you!"  Tim looked at me, smiled and said "Make sure you tell him I said hello!"  I got out of the crowd and jumped on my cell phone to call my mom.  Chris, my son, is visiting my parents, so she had to get him out of the pool and to the phone.  I told Chris what Lincecum said and he was speechless.  I really wish Chris had been able to make the trip, but my fear is that had he been here, Lincecum wouldn't have been signing. 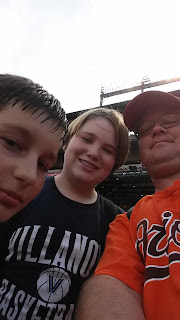 I was graphing with my friend from Instagram, Stefan, and another Instagrammer, Brian.  Stefan was able to get Lincecum twice and then got Trout!  Stefan has pledged to help me get Trout tomorrow, so maybe I will come away from this trip with some really good autos!  I had a really good time hanging out with the guys.  I am now getting into meeting up with fellow graphers, and have hat a lot of fun.  I know I'm really late to the game, but these kids have a lot of knowledge and expertise!

As far as the game, I hope that I am able to say that I saw Ubaldo Jimenez's last start as an Oriole.  You hate to see someone lose their job, but with the $50 million contract that he signed, he isn't hurting.  Let's hope Buck can find some decent starters somewhere, lest the Orioles lose their grip on the AL East lead.
Posted by William Regenthal at 11:25 PM