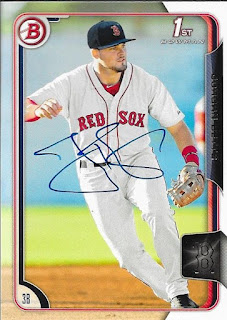 I kept a tradition alive this week when my wife and I went to a minor league game for July 4th.  This year, like we have the few years prior, we went to Zebulon, NC for a Carolina Mudcats game.  We used to go to Kinston Indians games, but since that team left town, Zebulon is now the closest team to us.

I met up with one of my good friends, Dugan, and we did a little bit of "graphing" before the game.  I always sit on the visitors side, as I feel like that gives me the best chance at getting stuff signed.  I didn't have a whole lot of cards of the visiting team, the Salem Red Sox, but I had several cards of their manager (Joe Oliver) and a few remaining prospect cards that I found in my rookie box.

I was able to get three cards signed, which was nice.  The above 2015 Bowman Jordan Betts turned out really well.  I had a thin point blue sharpie, but I feel like it did a pretty good job. 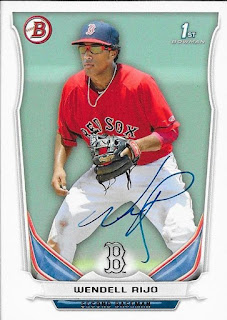 Here is a 2014 Bowman Wendell Rijo.  His signature isn't as nice as Betts's, but it still looks fine. 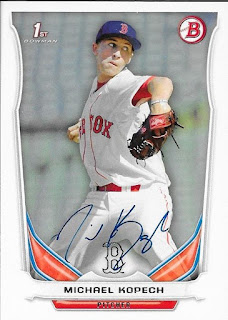 Finally, I got a 2014 Bowman signed by Michael Kopech.  His signature isn't too great, either, but I was still happy to come away with a few autos.  I had never taken cards with me to "graph", I always have used baseballs.  I liked how I did, except I am terrible at recognizing who the players are, especially when they are walking toward you, and their numbers are only visible on their backs. 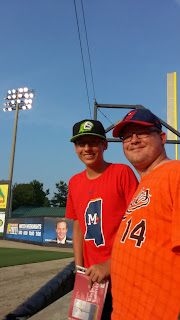 Here is a nice picture of my buddy, Dugan and I.  He was way more successful at getting his stuff signed.  He is a pro at "graphing" and helped me figure out who was who.  I really enjoyed spending time with him, and plan on taking him up on his offer to "graph" at Durham Bulls games. 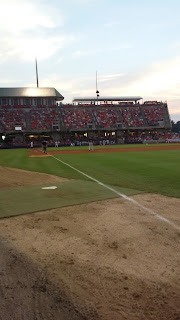 I enjoy Five County Stadium and watching the Mudcats.  I always have a good time when I go there, and always try to go at least once a year. 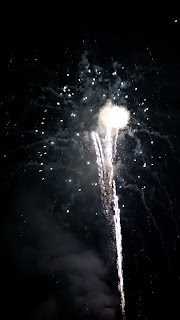 The fireworks show was great, as usual.  My wife and I try to hit a minor league game on July 4th, and always come away happy with the post-game show. 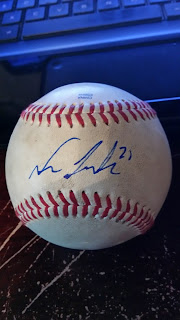 The Mudcats won the game, 9-6.  I was tossed a ball from Salem right fielder, Nick Longhi (which I dropped, and he re-threw to me).  I gave the ball to my sister who is in town and accompanied us to the game.  After the game, I flagged Longhi down and had him sign the ball for her.  He also hit a home run in the losing effort.

I had a really good time at the Mudcats game.  It was really nice spending time with my wife and sister, but it was also nice to be able to see and spend time with my great friend, Dugan.  He is a great guy, and I know we will be catching many more games together in the future.
Posted by William Regenthal at 5:22 PM