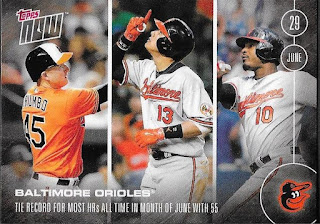 Topps came out with a really cool idea this season by putting the previous day's highlights on a card.  The concept gets even better in that the cards are only available for order for 24 hours, then the print run stops.  Some cards have been run for 200+ copies; some for over 1,000.  There have been a couple Orioles ones issued this year, but I finally took the plunge on Topps Now when the Orioles tied the home run record for June.

I bought the card off of the Topps website for $9.99 and it ended with a print run of 526 copies made. 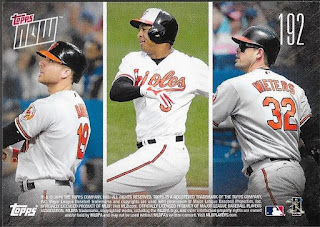 This card will be an entry in my Chris Davis PC, but when I was scanning the card for this blog post, I noticed something about the card that I didn't realize before.  Have you caught it yet?

That is Matt Wieters on a Topps card.  Why does that matter?  Well, since he signed with the Orioles, Wieters has not been featured on any Topps products, with the exception of Topps Bunt and E-Topps.  He has had no regular issue Topps cards.  He signed an exclusive deal with Razor back in 2008 that would have allowed him to appear on Topps or Upper Deck cards one year after his debut.  He has had no Topps cards at all, so either he or they have not budged.  So, this Topps Now card could be his first ever Topps card (really, who counts E-Topps or Topps Bunt?).  That makes this card that much cooler for me.

There are two other Chris Davis Topps Now cards that I have seen.  I plan on picking them up, but am holding out for the National.  My hope is that a vendor there will have them, and I can rack up.  I really like this concept and hope that Topps keeps it up.  I also hope some of my PC guys do some major things to end up on future offerings.
Posted by William Regenthal at 8:46 PM