So, my vacation is long over, but I still have a few things I can talk about, which is nice.  I wanted to show off some pictures I took when I visited Rickwood Field in Birmingham, Alabama on my way back home.  I had met up with Mr. McNair's son, Eric, for lunch that afternoon, and he suggested I take Chris to see the oldest existing baseball field in the US, Rickwood Field. 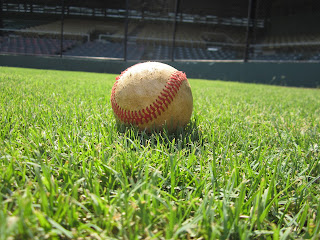 Rickwood Field used to be the home of the Birmingham Barons and the Birmingham Black Barons (of the Negro Leagues).  The field is in the process of being renovated/restored, but we were able to take a self-guided tour.  I took a ton of pictures, so here they are! 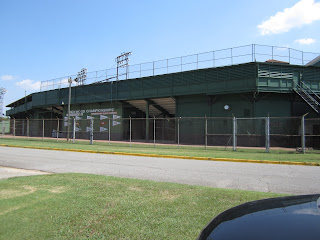 Here is the view from outside the field.  We just kind of walked around here, then jumped in the car until someone stopped us and told us that the gate was open and we could take a self guided tour. 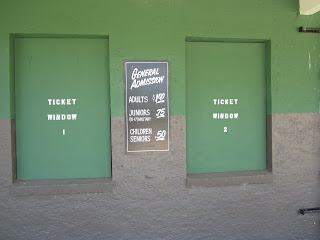 So, take a look at the prices posted.  I would love to get into a game for those prices. 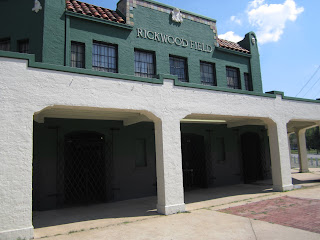 Here is a view of the front of the stadium.  I think it looks amazing.  I love old buildings, so this was right up my alley. 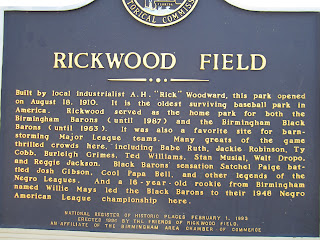 If you click the above picture, you should be able to read all of the info from the historical marker in front of the field.  It will give you the information much better than I could. 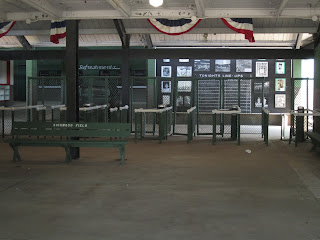 I like to imagine the above picture as a scene right before a big game.  The red, white and blue buntings are hanging, ready for fans to pass under, wearing their sunday best, incluring dress hats.  What I wouldn't give to be able to hop into the DeLorean and take in a game from the 1930s.  I'd be delighted to dress up in a suit, tie and top hat and watch.  Maybe eat some cracker jacks while I was at it.  Come on, Doc Brown, some through on that time machine! 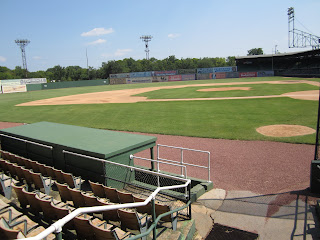 So, here are a few views from inside the park.  I hope you like them. 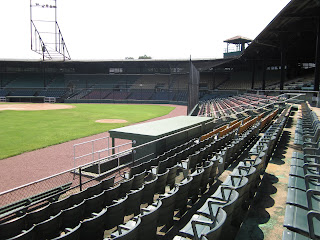 Check out the sweet scoreboard.  Also, it appears that the advertisements are authentic for the time period that they are aiming for in their restoration.  I always like looking at the old ads.  Really neat stuff. 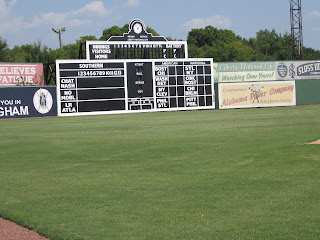 Here is a shot of Chris sitting in the dugout.  It was awesome being in the same dugout as players from Hank Aaron to Reggie Jackson. 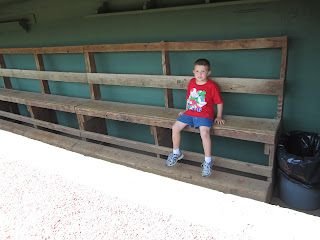 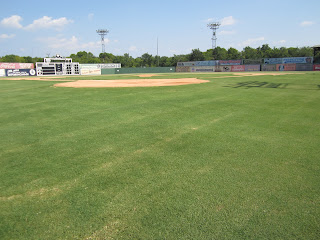 Ok, I don't think I'm alone, but I hope they leave the seats the way they are.  They look awesome.  This picture will be blown up and put on the man cave wall at some point. 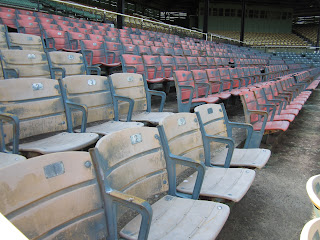 The picture below is an example of me messing around with the features of my camera again.  I did a color filter, only emphasizing the red seats and left everything else in black and white.  This looks like something that would be an amazing backdrop for a desktop or something.  I really like it. 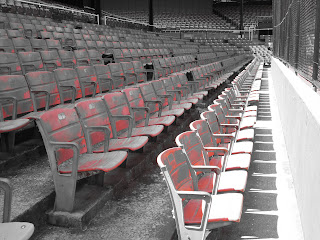 Chris was such a good sport on this trip.  Lots of time in the car, but he didn't complain once.  I was glad to share in this experience with him.  Hopefully he will remember it even long after I'm gone. 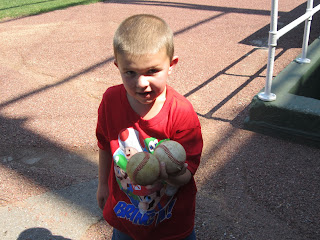 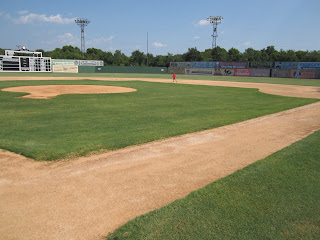 Here are a couple shots of Chris running the bases.  I, being the dork that I am, also scooped up a handful of dirt from the field and put it in a bag for me to take home.  I have no idea what I'm going to do with it, but I now have dirt from Doubleday Field in Cooperstown and Rickwood Field in Birmingham.  Kinda cool, I guess. 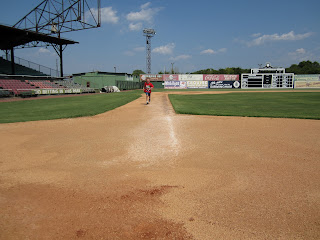 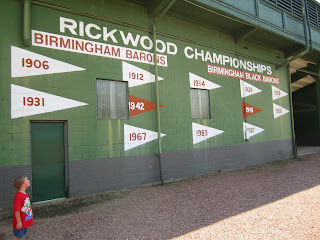 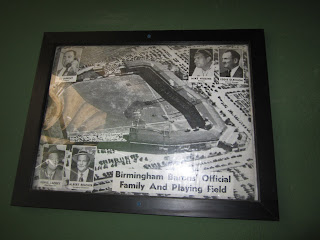 Here is a shot of what the field looked like back in it's heyday.  Oh, imagine being able to see a game during those times.  How awesome would that me?  I know I repeated myself, but oh well, it gets me excited.

So, I hope you all enjoyed my pictures from Rickwood Field, I thought it was a really cool place.
Posted by William Regenthal at 9:06 PM

What an awesome experience for you and Chris! I'd love to check it out myself some time, for sure! Nice job man!

I don't think I have seen a ballpark that really captures that "old timey" feel like this one does. I bet it sent some shivers up your spine knowing how many greats of the game played there!

I was there a few years back. Great place. Fun to walk around in. And yes, I ran around the bases, too.

Went last year to a college game. It was early spring and freezing, and I was able to walk around the ballpark when the game got boring. There were maybe a hundred fans, so it wasn't a big thing...Really cool park.

Don't know that you mentioned, the MiLB Birmingham Barons do a one-game fling in Rickwood (with period uniforms!) once every year. Would love to go to that...