Some Mail From Schuyler

I've been friends with Drew for quite a while now.  Since he and I have traded so much over the past few years, he has introduced me to some of his other close friends.  One of whom, Schuyler, has become a regular recipient of cards from me. 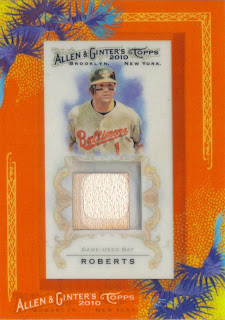 Any time I find a Team USA baseball card, I put it aside for Schuyler, since I know he is a huge fan and collector of said Team.  Recently, I went to the National Card Show and found a ton of Bowman Team USA cards.  I grabbed a bunch for myself and made sure to get one of each player I could find for Schuyler.  Schuyler's computer has been down for a while now, so he hasn't been able to send me any messages or post on his blog, but he did something that I really enjoy...  He sent me a letter.

Also included was the above 2010 Allen and Ginter Brian Roberts relic, which, I believe was not in my collection.  Schuyler went to his first card show a few weeks ago and was kind enough to think of me when he saw the card.  The gesture was much appreciated.  I, of course, hadn't been looking for any reciprocity, I just enjoy sending surprise packages of cards to people.

I'm glad the cards I sent to him meant that much and that they have found a good home.  Hopefully, Schuyler's computer issues will be resolved and he can get back to posting.  His blog is one of the more unique voices in the blogosphere and I hope he retains the desire to post his thoughts on a regular basis.  Schuyler, thanks for the card.  You are a good kid and I hope I find some more stuff to send you soon!

Thanks William,I feel the need to send you something after you have sent me a lot.
I just got a laptop for my and got to set it up today. So hopefully I will be able to post more stuff before school starts.
Didn't mean to delete the other 2 comments, whoops.