Now that I have sown all of the Hall of Fame signed baseballs I picked up at the National Card Show (4 of them), now I can show off the non-Hall of Famers I got.  First up is this steal I got on Sunday from a vendor who I had bought a bobblehead from the day before.  He had another bobblehead I was eyeing, so I bundled it with the ball and got both for $40. 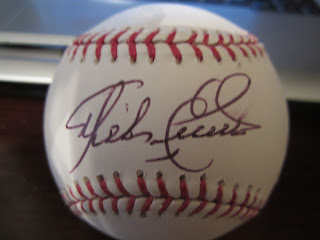 Mike Cuellar (b. 1937 - d. 2010) played in the majors from 1959, 1964-1977 for the Reds, Cardinals, Astros, Orioles and Angels.  He was best known as an Oriole.  He was co-winner of the AL Cy Young Award with Denny McLain in 1969.  He had a career record of 185-130, 1,632 strikeouts and an ERA of 3.14.  He won 20 or more games four times over 15 seasons.  He is probably the second greatest pitcher to have played for the Orioles behind Jim Palmer.  I would put Mike Mussina at third only because he never took home a Cy Young Award or won the World Series with the O's (Cuellar won in 1970).  I think Cuellar deserved more of a look for the Hall of Fame, but I suppose his numbers just don't stack up.  He didn't get a single vote in his first year of eligibility (1983) and was removed from the ballot after that.  I think, historically speaking, he is definitely underrated.  I'm glad I was able to add his autograph to my collection and I'm amazed at how cheap it ended up being.  The next historic Oriole I want to add is Mike Flanagan, so I will be on the lookout for his auto very soon.
Posted by William Regenthal at 10:11 PM

Nice pickup, William. You can never have enough Cuellar stuff. he was special.