I picked up my 73rd Hall of Fame signed baseball at the National Card Show on Sunday for a steal.  I had made up my mind to pick up a Frank Robinson ball that someone had for $50, but when I went by their table a second time that day, they were in the process of packing up and wouldn't look for the ball for me.  Annoyed (because it was 2PM and the show was scheduled to run until 5, yet they were packing up), I went to another dealer who had this Cepeda listed at $30 and another Hall of Famer I needed for $35 (he will be posted tomorrow). 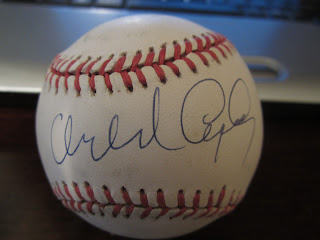 So, I asked the young man at this booth if he would accept $50 for both baseballs (a discount of $15 bucks) and he said he would have to ask his dad.  He asked, and the dad said that since it was Sunday and I had cash, he would take my offer.  Woo hoo, a nice deal on 2 Hall of Famers, $50 for both.  So, because the one dealer packed up, I was able to use what I would have spent on one ball and got 2 instead.  I also got the first dealer's business card, so I should be able to email them and still get the Frank Robinson for $50.  We'll see about that.

This was the second purchase I 'bundled' on Sunday (I got another signed ball and a bobblehead from another dealer) and this saved me $30, which I was able to take home and re-deposit into the bank account.  Not too bad, I think.

Beautiful sig! Great job getting it!

I have GOT to get to the National one day.

GREAT job on your wheeling and dealing!