I've been really sick the past few days.  I was sick enough today where I excused myself from work an hour early, came home and laid down for a nap.  It appears that I am going to be sidelined with "Flu-like Symptoms", much like some of the Orioles have been dealing with lately.  I woke up from my nap to find one of my padded mailers on my dresser and inside was this ball. 94-year old Mike Palagyi had responded to my TTM request.  He played one game for the Washington Senators in 1939.  He was a pitcher who had allowed 3 runs to score without recording an out, so his ERA is listed at 'infinity.' 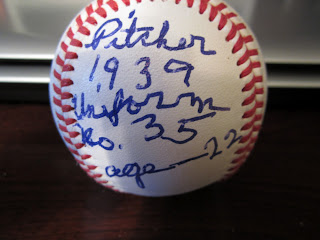 He was nice enough to add some inscriptions to the ball, "Pitcher 1939, Uniform No. 35, Age 22."  He also wrote a little something on the letter I sent and included it with the ball:

My roommate on road trip was Pete Appleton.  I worked out a lot with Buddy Lewis, was close with pitcher Dutch Leonard.  I played against Mickey Vernon in the Minors.  "Uncle Sammy" got me for almost 5 years - March 3, 1941 to November 1945.  I tried baseball in 1946 - didn't feel right - I quit.  Peace be with you!!

Now, I think I'll go lay back down.
Posted by William Regenthal at 6:08 PM

Sweet success dude! Any player from that era is always cool to have and it sounds like he hooked you up with some nice stuff!