1959 Topps Pickups From The Antique Shop

I thought it would be a good idea to show some of the 14 1959 Topps I chipped away from my want list during last weekend's visit to the Columbia antique shop. 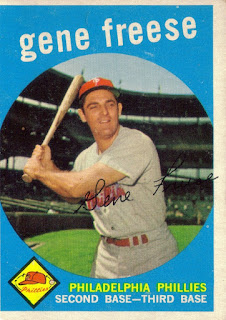 I thought the blue on this Gene Freese was really nice.  Again, the main reason I enjoy this set is because the colors of it are so awesome. 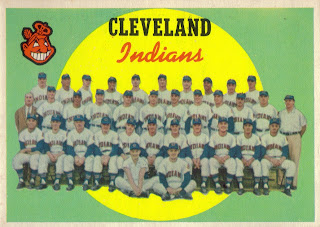 I got this Cleveland Indians team card, which has an unmarked checklist on the reverse.  It looks really sharp. I imagine some of the more popular teams from that era (Yankees, Dodgers, etc) are pretty expensive, especially if you want them unmarked. 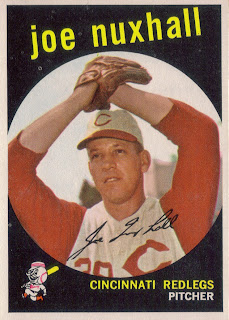 I thought this Joe Nuxhall was really cool.  Nuxhall first pitched in the majors at the age of 15 back in 1944 when he threw for 2/3 of an inning. 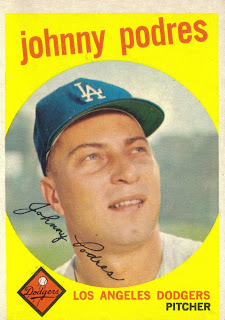 Finally, probably the biggest name I picked up this time around was this Johnny Podres.  Podres was a pretty good pitcher for the Dodgers in the 1950s and 1960s before moving on to Detroit and San Diego at the end of his career.

So, there you have it, a few of the 1959s that I got.  I might get some more this weekend at the Raleigh card show, so we'll have to see.
Posted by William Regenthal at 6:40 PM

Nice pickups, William. I'm slowly upgrading some of mine here and there. I love that Nuxhall. Something about the black framed Reds cards looks really great.

Great finds. Nothing better than high-grade '59s. I agree the colors of that set make it a favorite, just like the '75s.