I admit, I'm not the biggest football fan.  I mean, I used to be.  When my younger brother played college ball, I would go to many a game.  Even before that, when my older brother (we were in the same grade) played high school ball, I went to almost every one of his games (except for the one Mom and I got lost going to).

I casually follow the Carolina Panthers because of the 11 years I lived in Charlotte, but other than that, I don't follow it like I do baseball.  I know of some of the legends of the game, but until I read Drew's post on him, I had no idea who Chuck Bednarik was. 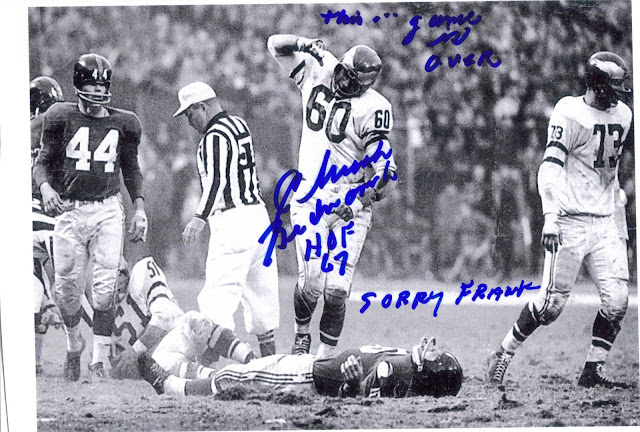 I thought the photo Drew got back from him TTM was amazing, though and during one of our Skype chats, I asked him if he could hook me up with a Bednarik photo that I could try to get signed TTM as well.  Well, Drew sent me one a little while later in a really nice package of stuff, so I was able to send to Mr. Bednarik and request an autograph.

As you can see above, he signed the photo and filled it with inscriptions.  In this game, he laid out Frank Gifford (this was 1960) and caused Gifford to miss the next 18 months due to injuries sustained from the hit.  Wow.

Thanks for the photo and the idea, Drew!
Posted by William Regenthal at 9:07 PM

Awesome success man! You are most certainly welcome :)