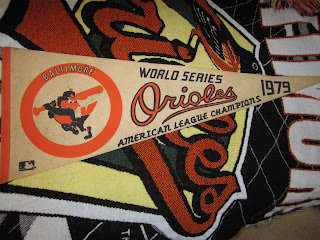 The Orioles are playing some great baseball right now.  I have been reluctant to post about it because they got off to a good start last year, only to fall apart quickly and fade to the basement of the AL East for yet another season.  They have had 14 straight losing seasons since 1997 when they last went to the playoffs.

I have a friend who is a Red Sox fan who is still talking trash.  I don't want to respond to his trash talk because, one, I don't gloat, and two, I've been fooled before.  The Orioles were playing great baseball in the 2005 season.  They spent much of the first half in first place.  I believe 4 of their players were selected to the All Star team.  Then the wheels fell off.

This season, I'm sensing a much different feeling than in the years since my senior year of High School.  The Orioles are playing good baseball.  It isn't quite great.  Not yet.  They still have too many errors.  Jake Arrieta and Tommy Hunter have been inconsistent.  Brian Matusz's season last year left such a bad taste in my mouth, it'll take more than Crown Royal to burn it out.  Yet, he has won his last 3 decisions.  He has looked pretty good doing it, too!  I hope he is back to his late 2010 form.

Adam Jones has emerged as a superstar and is about to be paid handsomely.

Matt Wieters has emerged as the best catcher in the game.  I want him calling the games for all of the O's pitchers, but I know he needs rest.  His bat is mired in a tough slump, but I know he will get out of it.

Brian Roberts is about 3 weeks away from returning, after many pundits felt that his career was done.

Nolan Reimold was on the verge of busting out before a bulging disc in his cervical spine derailed him.  If he can get back and resume his early season form, watch out!

Jason Hammel has been a pleasant surprise.  What a pickup!

I don't like to brag or gloat about my team doing well, but I deserve to enjoy the good times.  It has been so long since I have been able to look at the box scores and have a good feeling about them.  I'm not sure if they can sustain this for the whole season, but, WHY NOT?  Why not the O's?  Let's keep it up, it has been a fun season so far!
Posted by William Regenthal at 12:59 PM

O they are doing quite well in the AL
East. Cross our fingers that they keep it up. :)

Of course they lose the day I actually post this :(