I was pleasantly surprised today to find another of my padded mailers in my mailbox.  It has been a while since I have gotten TTM successes in rapid succession, so I was very pleased that this ball came so quickly after a previous success. 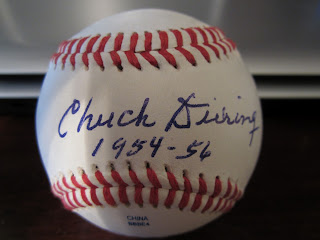 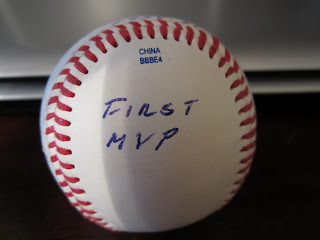 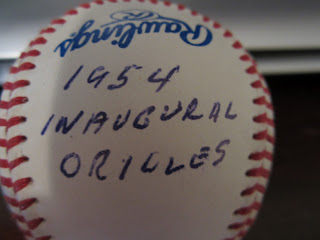 Diring his career, he had 411 hits, 14 home runs and a .249 batting average.  He became part of the Orioles when the team selected him from the Pacific Coast League as part of the Rule V draft in 1953.

He was also kind enough to send along the above note, so here it is.  If you can't read it, this is what it says:

We had great fans that supported a mediocre club.  Was proud to be selected first MVP in Baltimore, Chuck Diering.

I'm really happy that I got this success back, especially when it came so fast!  I really appreciate the time Mr. Diering took to write the note and add inscriptions to the ball, and for free!
Posted by William Regenthal at 6:17 PM

That's a really nice return. Makes it seem much more special, doesn't it?