I'm wore out.  It was a nice, long day at the card show today.  I passed out links to my blog to several people, so let's hope that I get some reads from it.  I saw some friends of the blog today.  I also met fellow blogger Scott and his family, which was really nice.  What a great group of people they are.  Scott had an amazing pull, but that is for him to tell over at his blog, so click the link here and hopefully he will get it posted soon.

I had my own share of good luck today as well.  I spent $5 and got 3 1959 Topps for my set, one 1951 Bowman for my good friend Andrew and a 1952 Bowman Ray Scarborough for another friend who collects him.  Not too bad, I think.

I also got my 66th Hall of Fame signed baseball, from another dealer and his son (who were also really nice guys and it turns out, they are from Greenville, NC also) whom I traded my Evan Longoria jersey along with $25 to get this ball: 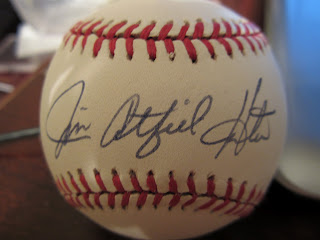 I have been needing Catfish Hunter for a while now.  I was going to get one from another good friend, Dustin, but he had forgotten his ball was inscribed to him and I thought it would be better if he kept it.  So, I was able to add this one and Dustin was able to keep his.

Hunter was elected to the Hall of Fame in 1987 (his 3rd year of eligibility) when he was named on 76.3% of the ballot.  He passed away in 1999 due to complications of ALS, also known as Lou Gehrig's Disease.
Posted by William Regenthal at 9:54 PM

Wow... that's one helluva addition to your collection.