I got yet another TTM success yesterday when I received this signed baseball from former pitcher Jim Kaat.  I mailed to Kaat on April 23, included a $25.00 donation to his foundation (cancer research in memory of his wife, Mary Ann) and got my ball back on May 7 for a 14-day TAT. 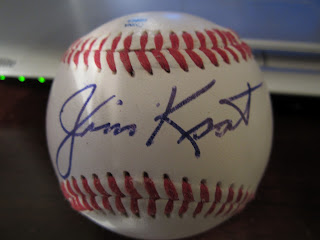 Kaat appeared on the Hall of Fame ballot beginning in 1989.  He received as much as 29.6% inclusion on subsequent ballots before falling off the ballot after his 15th year of eligibility in 2003.  He narrowly missed being elected to the Hall of Fame on the 2012 Veterans Committee by two votes.  He needed 12 of the 16 votes required and received only 10.

Kaat is my 56th TTM success.  Currently, I have 7 baseballs out for TTM, but I'm thinking at least 3 of them will be written off as failures.  Time to start looking for new people to send to.  Anyone have any ideas?
Posted by William Regenthal at 5:38 PM

Nice job on the Kitty Kaat!