Christopher got a real treat today when he had the opportunity to meet his favorite wrestler, Sheamus, at the Carolina Ale House in Cary, NC.  Sheamus was doing an appearance to promote this weekend's Over The Limit Pay Per View.  Last year, my good friend Mike got Chris a photo autographed and recorded a video greeting from Sheamus to Chris on his phone. We were the first in line to meet Sheamus, and as he came in the room, he immediately walked up to Chris, said hello and shook his hand.  He then called us over to his table where he spoke with Chris and signed an autograph for him.  I told Sheamus how much Chris loved to watch him and how much we all appreciated his video message to Chris last year (to which Sheamus said that he remembered). 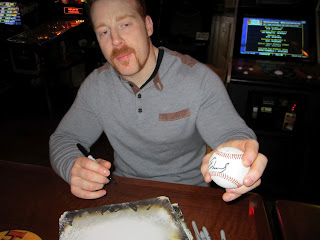 I offered up a baseball for him to sign (since I have former World Champions Harley Race and Chris Jericho) and Sheamus looked really apprehensive.  He felt bad because he hadn't had much experience signing baseballs, but I assured him that any effort was ok with me.  He also told me that since he was born in Ireland, he had never even seen a baseball until he came over to the States a few years ago. 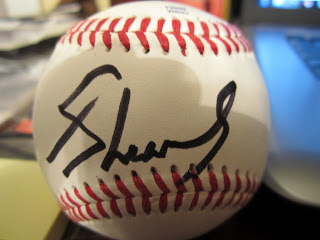 In all, the signature turned out fine.  I really like it.  He also signed one of their standard autograph pictures for me as well. 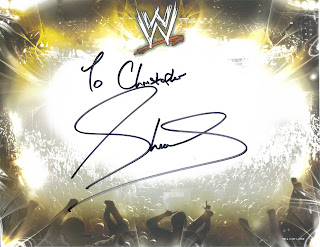 Here is the one he signed for Chris.  Chris was so excited to meet his favorite wrestler.  He talks about and emulates Sheamus all the time, so this was a really cool thing for him to be able to do, at 6 years old!  He has already met a number of 'famous people.'  I'm glad, as a father, to be able to help my son experience some of these things.

Posted by William Regenthal at 8:06 PM

Awesome story man! Sheamus is definitely one of my faves as well, heel or face, I've always liked him!

Awesome! He really has only been in the States for a few years? I've never been 100% sure about his Irish angle. I knew he was Irish, but you never know how much they exaggerate for the sake of entertainment.

That is an awesome story. I heard Sheamus was a real nice guy in person. Glad that your son got to meet one of his favorites.

Sounds like a pretty awesome experience! Congrats to you and Chris on the big day!