I spent this weekend visiting my younger brother in Columbia, South Carolina for my niece's 4th birthday party.  As always, when I'm in Columbia, I visit this really awesome antique shop called 'Chic Antiques.'  The shop is run by a friend of a friend (it's a small world) and I always like going and saying hello.  I always seem to find some good deals while I'm there.  I got myself several 1959 Topps for my set (which I will show later), a couple cards for my good buddy Andrew, a 1961 Topps Boston Red Sox team card for Scott, 2 1963 Fleer for another friend and finished up with this amazing signed baseball for a paltry $50 bucks. 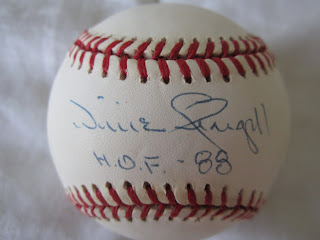 I told the shop keeper that I was looking for some Hall of Fame signed baseballs and he brought out several to see what I needed.  He showed me this Willie Stargell and quoted me the amazingly low price of $50, so I had to jump on it.  The ball is not authenticated, but I know that it is legit.  I have 100% confidence that anything the guy sells me is authentic.

Stargell is now my 65th Hall of Fame signed baseball.  I'm hoping I can knock off a couple more at next week's card show.
Posted by William Regenthal at 10:26 PM

Congrats on the ball. Sweet!

Nice pick up! Are you gonna get it authenticated?