Continuing on my vacation, I subjected my cousin to another Minor League game. This time, we went to Zebulon, NC to a Carolina Mudcats game. Carolina was playing Chattanooga again, and since Max was unable to get his bat signed by Dee Gordon when we were in Chattanooga, we tried again... this time a little closer to home. So, the three of us braved the heat and went to the game and ended up having an awesome time. Max was able to get his bat signed by Gordon, which was his main objective. He has had the bat for a few months now, since Chris got it for him at an earlier Mudcats vs Lookouts game. 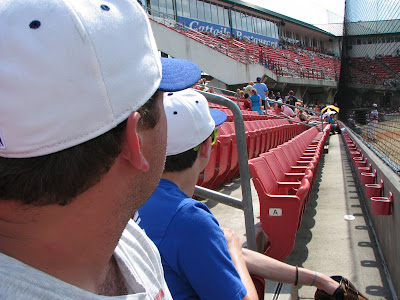 Here are Max and I discussing how awesome we look in matching hats. Either that or we were discussing which player autographs we wanted to pursue next. I seriously don't think there is a person who I would rather watch a game with, than Max. We really enjoy talking about the game together, and our back and forth banter is definitely worth listening to. My cousin said that he found it to be very entertaining. 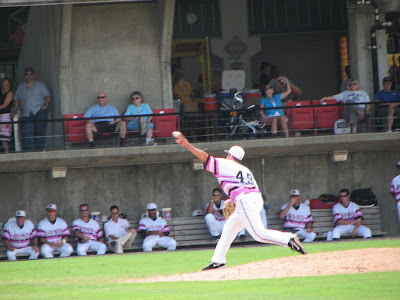 The mudcats were wearing special jerseys which were to be auctioned off to benefit cancer research. They looked like pink Houston Astros jerseys. I almost bought one, but I felt like the $90 opening bid was a little higher than I wanted to spend. 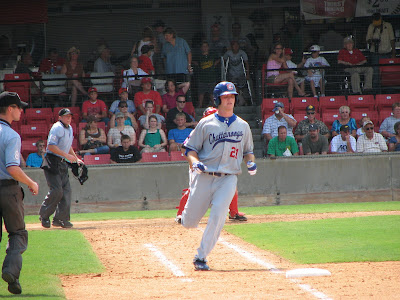 Here is Lookouts Pitcher (and Dodger Prospect) Chris Withrow running to first base. He got lit up while we were there. I think the heat played a role. Both Withrow and the Mudcats' pitcher struggled with command. The Mudcats' pitcher also barfed twice on the field before being lifted for a reliever. I wonder if anyone bid on his jersey... 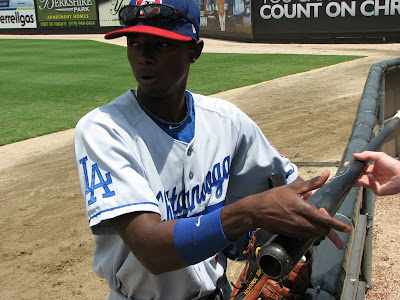 We got a little tease before the game as Dee Gordon came over to sign Max's bat, only to be called over for pre-game drills. He promised to come back, and lived up on his promise. I was so happy that Max met his goal.
.
The coolest part of the game, however, was when Andrew Lambo (another top Dodger prospect) jacked a home run that went over the wall and hit the visiting clubhouse roof. I told Max he should go see if he could get the ball. I went myself and was able to talk a groundskeeper into looking for it for me. Luckily, he found the ball and tossed it over the fence to me. Max was able to get Lambo to sign it (actually, I got it signed for him because he was getting his bat signed at the time). I'm sure Max will be putting his ball and bat up on either his blog or our memorabilia blog.
.
We had a blast at this game, as usual. I think Five County Stadium is near the top of the list as far as being able to get signatures, so if you are in town and want to give it a shot, head by there and see how it works for you. I have been pretty lucky so far this season. The best part is that my best friend was able to get some cool stuff to add to his Dodger collection.
Posted by William Regenthal at 3:25 PM

Gordon and Lambo signed for you? I'm jealous. Keep up the great work.