As a reward for Max doing well in the first summer session at NCSU, a precursor to my impending vacation, and a reason to go on a road trip with my best friend and my younger brother, we all decided we'd take a trip to Chattanooga, TN in order to catch a Lookouts game.

I picked Max up in Raleigh Friday evening, then we drove from Raleigh to Columbia, SC to spend the night with my brother Adam. Highlights from Friday evening was the light show (constant lightning, NONSTOP) from Florence to Columbia and hanging out on the rooftop of the Columbia Sheraton. 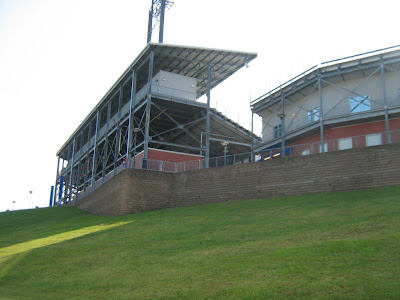 We woke up early Saturday morning and drove from Columbia to Chattanooga (a 5 and 1/2 hour drive). Downtown Chattanooga was really nice. We walked around there for a bit before we headed into AT&T Field. Parking was readily available in the vicinity of the park, we parked in a parking deck for the whole evening for the price of $7.00. The concession areas take debit cards, so that was nice. Their hot dogs were really good. 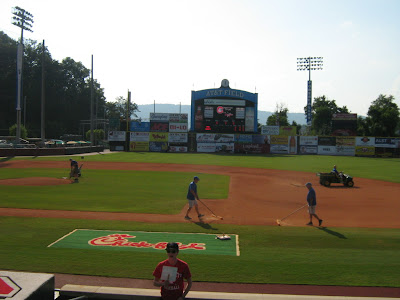 It was really hot when we got to our seats. Max and I walked down to the home dugout to try and get him some autos since the Lookouts are the AA affiliate of the Dodgers. 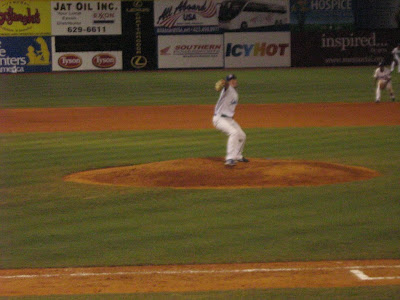 We were able to see Dodger pitching prospect Chris Withrow pitch, which was nice. Max had wanted to get the bat that my son got him at a Carolina Mudcats vs Lookouts game signed by Dee Gordon, but Gordon was at the Futures Game. We are going to try again to get that on a later date. 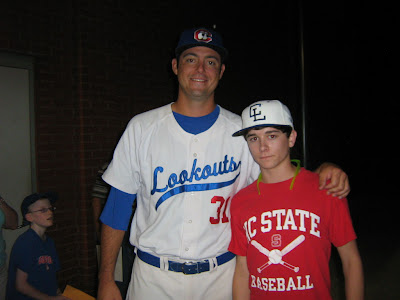 Pitcher james Adkins was standing outside and posed for a picture with Max after he signed a ball for him.
This was one of the best trips I have had, and I was able to spend it with my brother and my best friend. My brother isn't a huge baseball fan like Max and I, he had enjoyed his trips to Chattanooga while playing college football, so he had originally suggested that we go there, sine the 3 of us had discussed which minor league teams we wanted to catch.
This was a really good choice, as a great time was had by all. I'm very fortunate to have the people around me who enjoy my hobby as much as I do.
Posted by William Regenthal at 6:50 PM