Whew. I packed so much into yesterday, its hard for me to believe everything I did. Add that to everything I have done on this trip and it seems like I worked my tail off on this trip... and it's supposed to be my vacation.

First things first, to my surprise, the Orioles activated Brian Roberts before the start of yesterdays game. That was really awesome, so, now I can say I was at the game that turned the Orioles season around. I really feel like Roberts' absence from the lineup is one of the main culprits for the disaster which has been the 2010 Orioles season. 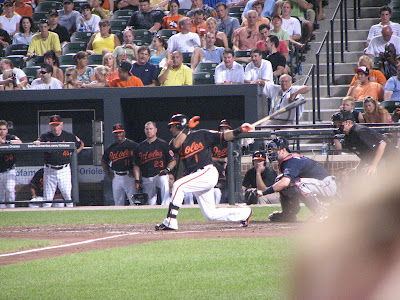 Roberts went 0-4 in his return, but he worked the count in all of his plate appearances. Something the O's hitters didn't do in the 5-0 loss the day before.

I acheived one of the goals I set out on when I left Greenville, and that was to meet MASNSports.com's Roch Kubatko. I have followed Roch since he was a reporter for the Baltimore Sun. Now, he reports and blogs for MASNSports.com. I read his blog daily, and it is the best source for Orioles news. 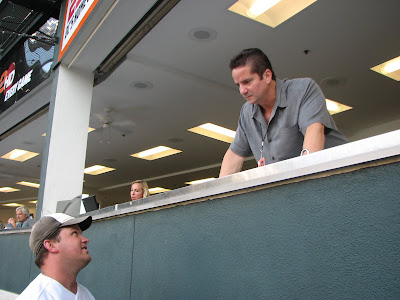 I met up with Roch at the press box and talked O's baseball with him for a good 20 minutes. He was really gracious to let me intrude in his daily routine. We talked everything from Roberts' return to Nolan Reimold to minor league ballparks. This was a huge highlight in my trip. 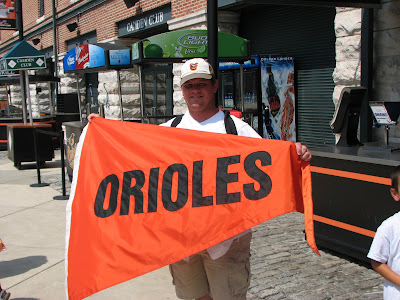 We also did the Camden Yards tour. I did the tour once before in 2005, but we had time to kill and decided that for $9 it was well worth it. Boy, was I right...
.
There wasn't time for a photo op and I had my baseballs and pen buried in my backpack, so when we walked by the radio booths and saw Bert Blyleven standing there, I wasn't able to get an auto or picture. It didn't matter, though, I shook his hand, told him he should be in the hall of fame. He asked me my name and where I was from. He was really nice. I wish I had been able to at least get a pic with him, but I realized he was busy. He thanked me for stopping by, and we continued on our tour.
.
Just being able to say I met and shook hands with Bert Blyleven is really cool.
I can now say that I have met and shook hands with: Brooks Robinson, Bert Blyleven, Chris Hoiles, Tippy Martinez, Nolan Reimold, Brandon Waring and Brandon Snyder. Each of those guys was really cool and stopped long enough for me to have a brief conversation with them.
I will post about the game itself when we get home later today, but the Orioles actually did win, which was so cool. I almost forgot how a win in person felt.
.
After the game, we waited be the parking lot to try one final time to get Jim Thome's autograph. While we were waiting, Brian Matusz came out, I spoke to him for a second, but he said he didn't have time to sign right now. Then, Thome and Mauer came out together. I was unable to get Thome to sign, either. Dang. Oh well. I did get John 'T-Bone' Shelby, only after he complained about it. Someone later told me that he always complains to give fans a hard time, and usually doesn't sign. Well, he signed my ball, so I guess its a win for me. Its not like I harrassed the guy.
I had an awesome time on this trip and accomplished all but one of my goals (getting Thome to sign). I would say I was really successful.
Posted by William Regenthal at 9:38 AM

Sounds like you had agreat time. As a Dodger fan, I think getting John Shelby's autograph is cool.