I broke down the other day and bought 3 boxes of 2010 A&G. I wasn't going to get any because I thought the Stephen Strasburg mania was going to drive the prices waaaay up and I also thought that with the hype, no boxes would be available when I got to the shop.

Well, there were boxes at the shop, so I decided I was going to get two. I then texted Max to see if he wanted to go halves on a box, which he did, so I ended up getting 3.

I busted one box at the card shop with my brother Andy, then went to Max's place on Monday and broke the other two. 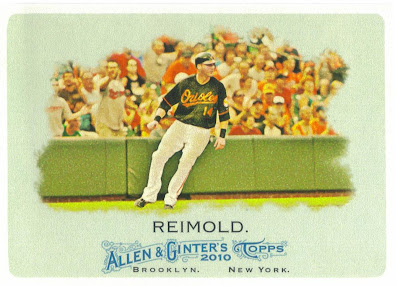 I really like this year's design. I was pretty disappointed in last year's offering. The roll marks really pissed me off, so that pretty much killed it for me. You can see that I'm still working on 09 A&G. I'll finish it eventually. This Reimold is pretty sweet. 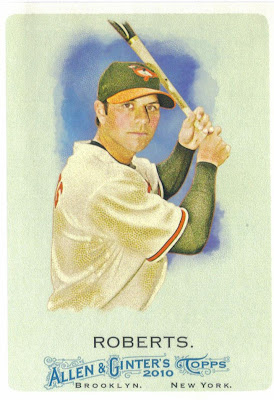 Here is this year's Roberts. I want to try to get as many versions of him as I can. I have a bunch of his other A&Gs, so this year will be a nice challenge as well. 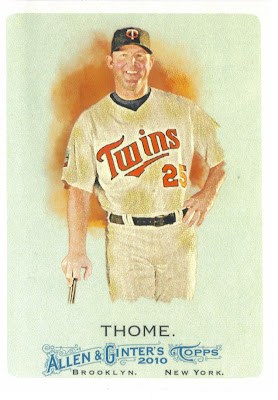 I'm really satisfied with this year's Allen and Ginter. I got some sweet autos (which I will post later) and a rip card (Yunel Escobar). I let Max rip the card since he hadn't ripped one before and we got a Pablo Sandoval exclusive mini. I let Max keep the ripped Escobar and the mini Sandoval.
A couple things now:
Posted by William Regenthal at 7:40 PM

I posted my wantlist so if you can help me out let me know. If you have any mini-Yankees let me know, I'm interested in them.