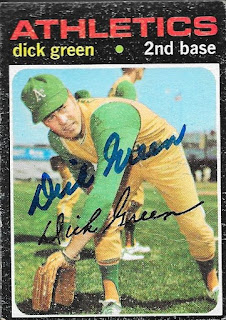 I liked this card so much, I used it as my example for 1971 Topps on my Topps Autograph Project.  Don't forget to check out the tab that I put up for the project, which I didn't realize wasn't up initially.  The green and yellow on this card really pops.  Even the guy's name is green.  The card itself is in pretty rough shape, due to the black border on the 1971 Topps.  The autograph looks really nice, and it just turned out to be a really cool card.

Green spent his entire career with the A's and was rewarded with three championships in 1972, 73 and 74.

I mailed to Green on November 12 and got the card back on December 8, for a 26-day TAT.
Posted by William Regenthal at 10:32 PM