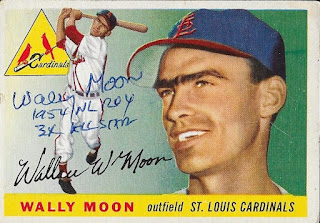 My Topps Autograph Project is really coming along nicely.  I have been working on racking up certain years of Topps, while also making sure that I have good representatives of each year.  I have gotten quite a few early 50s cards already.  Surprisingly, though, I have only gotten one 1955 Topps so far.  I got this Wally Moon autograph TTM on March 29 after paying his fee of $6.00 for a card.  I included an additional $4 for two inscriptions ($2 each).  He inscribed it with the 1954 NL ROY and 3x All Star inscriptions.

I mailed to Moon on March 18 and got the card back 11 days later.
Posted by William Regenthal at 11:31 PM