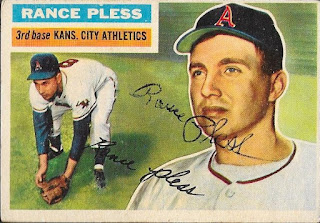 April 1st was no Fool's Day for me.  I received 7 TTM success that day, putting me way behind on posting.  A couple days later, I would receive 10 more TTM successes, so I really need to get on the ball (so to speak) and catch up.

The next to last TTM success I received on April 1 was this 1956 Topps from Rance Pless.  Pless is a great TTM signer, and I had to add him to my project.  Especially since the 1956 Topps is his only card.  I bought it off of Ebay for a couple bucks for the specific purpose of getting it signed TTM.

Pless also responded in a few words to my note that I sent, saying that in 1956, Kansas City was HOT.

I mailed to him on March 25 and got the card back 7 days later.
Posted by William Regenthal at 9:31 AM