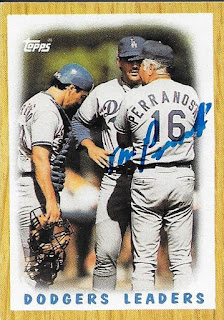 I got a TTM success back from former pitcher, Ron Perranoski on March 28.  I saw him on this 1987 Topps Dodgers Leaders card, and thought it would look cool signed (and add another 1987 Topps to the tally).  I mailed the card on March 18, so it only took 10 days to get it back.