I've been pretty busy lately because I am preparing a bunch of stuff to take to the December 17-19 card show in Raleigh. This will be my first attempt to set up a table at a show and sell stuff. We'll see how it goes. This is the next logical step in my goal to start up some kind of card shop. Wish me luck. 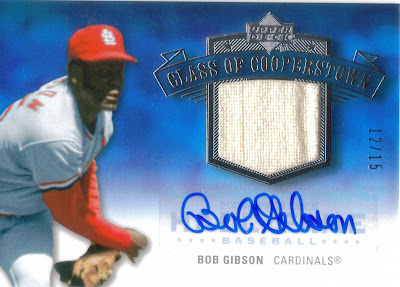 I missed doing one of these posts last week due to how busy I've been, so I wanted to make sure this week's 'Hidden' post was a good one.
.
I have already posted on the Upper Deck Hall of Fame set of 2005 when I talked about the Harmon Killebrew that I pulled. I bought the tin from a now-closed shop in Statesville, NC. I remember, it was a Stan Musial tin (which I still have... somewhere). I'm pretty sure I only bought one of them because they were $100 each. I got the Killebrew as a redemption and got this Bob Gibson relic/auto out of the pack. So, technically, this was my first auto of a Hall of Famer. It is a really awesome card, I especially love Gibson's sideburns.
.
Gibson was AWESOME in his day, he won 2 Cy Young awards, an MVP, 2 World Series... He is also the reason the pitcher's mound was lowered starting in the 1969 season.
Posted by William Regenthal at 10:34 PM

WOW!!! That is nice!! I have a thing for Gibson too, I have a few decent cards of his. But that is sweet!